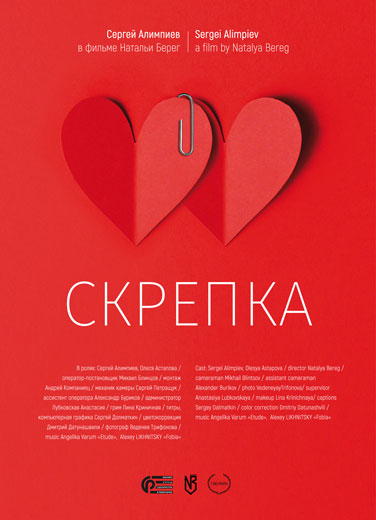 For the second year in a row, Natalia Bereg's works are a part of the famous film festival KOROCHE founded by the russian film industry leaders. Let us remind you that last year two works were included in the festival's main program – the fable film «Earth» and the little film «Birthday», a sketch for a future full length movie (the feature-length’s title will for now remain a secret).

The main role in the movie is played by a prominent Saint Petersburg actor, Sergey Alimpiev. The film is a silent movie and an experiment in itself – the "tactile" camera interaction that from time to time replaces the main heroine, able not only to talk, but to move as well. Thus a general view security camera "throws" the viewer into a "known" reality, and the subjective camera brings back the sensuality, which would be the force of gravity between the two loving, but unable to communicate heroes – something that words can say, or something more than that?

The film can be experienced at the Maly Zal of the film theatre «Zarya» in the end of the showing of «Chelovechnost 18+». The film starts at 19:30.